In the first century (CE) time of the first appearance of the Messiah on earth (there will be a second appearance; we believe in this twenty-first century), two especially important customs were observed that added to the excitement and fervor of the celebration of Chag HaSukkot. These are: the lighting the four great outdoor Lampstands; and the ceremony of the outpouring of water. 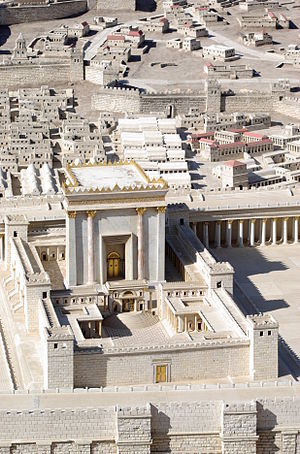 .The women’s section in front of the Temple

.The court of the women (in blue)

*Ezrat hanashim (עזרת נשים‬-court of the women) in the second temple (בית־המקדש השני) was located in the outer forecourt of the Temple in Jerusalem. The court was also known as the “middle court,” as it stood between the outer court (the court of the gentiles) and the court of Israel (עזרת ישראל).

Four Youths #4.  Four youths of priestly descent each held a pitcher of oil.

Four Pitchers of Olive Oil #5.  Each of the pitchers of oil that the youths of priestly descent held was capable of holding one hundred and twenty log (over ten gallons) from which they filled each bowl. The old, worn-out priestly garments of the priests served as wicks to light the four lamps. There was not a court in Jerusalem that was not lit up by this light. The light in the Court of the Women illuminated the entire Temple Mount and part of the surrounding area so brightly that the worshipers on their way up to Jerusalem could see the light of their flames from miles around in every direction.

Dancing with fullness of joy before Adonai Eoheinu (the LORD our God):

The pious worshipers danced before the people with flaming torches in their hands while singing hymns and songs of praise. The Levites provided musical accompaniment to the festive lighting ceremony with harps, lutes, cymbals, trumpets, and other instruments of music, as they stood upon the fifteen steps that (by a full measure of grace) led down from the Court of Israel to that of the Women, according to the number of the fifteen Songs of Degrees in the Book of Psalms.

The Shekinah, the Glory Cloud

Light of the Presence #1.  The light shining out of the Temple that conquered the darkness all-around and lit up every court in Jerusalem was a symbol of the Shekinah, the Glory Cloud of the Holy One’s Presence that historically had led the people of Israel out of the bondage of slavery in Egypt into the blessing and freedom of the promised land of Israel.

The Golden Pitcher of Water:

The House of Outpouring #2.  The “Golden Pitcher” represents the gift of God’s Indwelling Presence (gold is the metal of Divinity) and of His very precious Living Water; therefore, the life of His Spirit and His Living Torah. To collect the water for the Simchat Beit HaShoeva (שמחת בית השואבה) the priests used the Golden Pitcher which could hold three logs of water (about a quart). Our ancient Jewish writers refer to this aspect as the “pouring out of the  Spirit of the Holy One,” referring back to Isaiah 12:3:

Therefore with Joy shall you draw water out of the wells of salvation. 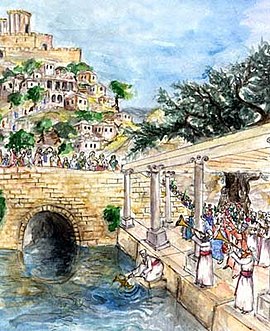 Simchat Beit HaShoeva. A painting by the artist Dafna Levanon.

The House of Outpouring #3.  The rite of water libation was performed for all seven days, however, on the Sabbath they fetched the water from a golden vessel in the Temple itself, into which it had been carried from Breikhat HaShiloah (ברכת השילוח-The Pool of Shiloah) the preceding day.

The House of Outpouring #4.  (First) Step) The processional began from the Temple and began with the sound of music. The procession followed a priest who would take a golden pitcher down past the Fountain Gate (שער העין ) to the Pool of Shiloah (Siloam) and fill it with water.

The day came (Chag HaMatzot) when the Pesach (Korban Pesach) was to be sacrificed. And Yeshua sent Keifa and Yochanan, saying, “Go and prepare the Pesach (seder) for us, so that we may eat it.” They said to him, “Where do you want us to prepare it?” And he said to them, “When you have entered the city, a man will meet you carrying a pitcher of water. Follow him into the house that he enters, and you shall say to the owner of the house [the owner of the upper room in the Inn], “So says our Rabbi to you, where is the lodging-place in which I may eat the Pesach with my disciples?” And he will show you a large, furnished upper room; prepare it there.”

House of Outpouring #6.  We believe these pre-Seder instructions by the Messiah for two of his disciples to follow the mysterious man with a Pitcher of Water are meant as a deliberate metaphorical connection to the water libation ceremonies of Sukkot.

House of Outpouring #8.  This means if we will carefully trace (follow) all the “steps” of the priest (the unnamed man) who carries the Golden Pitcher of Water during the water libation ceremonies of Sukkot (in the fall) we will better understand the sodim, sodit (deep spiritual meanings) of the Jewish observance of our Seder during Pesach (in the spring). Therefore:

We must follow carefully everything that the mysterious (unnamed) man with the (Golden) Pitcher of Water is doing.

House of Outpouring #9.  (Second Step) In a procession heralded by trumpets and joyful songs of praise the priest with the Golden Pitcher would meet up with another priest with a wine (drink) offering in his hand.

House of Outpouring #10.  (Third Step) The two priests would next go up the ramp together to the altar of the Temple.

House of Outpouring #11.  (Fourth Step) The two priests would pour both the water and the wine into two special silver funnels which would cause these liquids to come out at the bottom of the altar of the Temple in the form of raindrops.

House of Outpouring #12.  (Fifth Step) After the outpouring of the water and the wine, the *Hallel was sung as the priests completed a circle around the altar of the Temple. The chanting especially should include Psalm 118:25:

*Hallel (הלל) – A series of six psalms were sung. The number six is a symbol for the creation of man. We suggest you sing these six psalms; and when you meditate on them especially focus on their messianic meanings. Sing and meditate on Psalms 113-118.

In Temple times:  While the chanting took place, the worshipers around the Temple would be waving their Lulavs and singing and chanting the Hallel. This joyful worship music would fill the air – continually building the excitement that culminated in a fever pitch on the great and final seventh day of the festival.